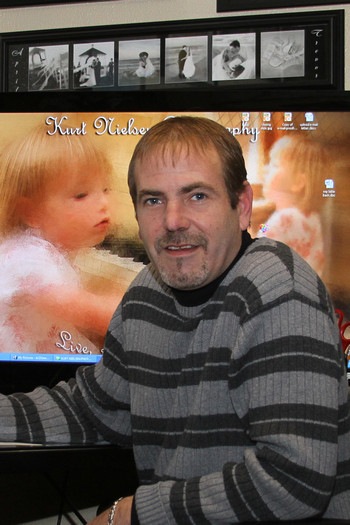 Kurt began his photographic career a little different than most photographers. He actually went to college at the University of Toledo for drafting and design. While working on a group project for one of his classes, he found himself taking photographs for the project and thinking to himself, "this is kind of cool." He continued on with his goal of graduating with a degree in drafting and design but added some photography classes to his schedule. At that time, there was no degree program for photography at the University. He continued taking photographs as a hobby and worked as a drafter in a local machine shop. One day Kurt saw an ad in a local paper for a national "chain store" portrait studio and decided to apply for the job. Out of all of the applicants, Kurt was only one of two people that actually had a portfolio and he brought it with him to his interview. He got the job. Within 6 months of being at that job, he was nominated as top photographer in the area. He worked at that studio for 21 months and learned a lot about portrait photography.

While at the first "chain store" portrait studio, Kurt was offered a job at another "chain store" print lab with a small portrait studio business that wanted to become a larger portrait studio. Kurt was up for the challenge and decided it was time for a change. Kurt took the job as the new portrait studio manager and quickly became their National Store Manager of the Year, not once but twice. This was something that was never previously achieved by any of their store managers. Not only was he their most sought after portrait photographer, but he added Wedding Photography to their growing portrait business. He grew their portrait studio sales from just a few hundred dollars per month to several thousand dollars each month. Eventually, he began traveling all around the country to the chain's other stores to train their store managers on how to grow their portrait photography business.

With all of Kurt's successes at this chain store, he was not happy with the way the customers were treated. He felt his customers deserved more time and attention during their portrait sessions. He wanted to be more creative with his photography and couldn't because of the time constraints from the studio rules. He also felt the chain store was more interested in volume sales and not interested in the needs and wants of their customers. Then, one day the chain store "bosses" asked Kurt to develop a business plan to help them improve their operation. Kurt worked diligently on this plan for 2 1/2 weeks. However, when he turned it over to them, they told him it would never work. That's when Kurt decided to go out on his own and he took that business plan with him. In October of 1997, Kurt Nielsen Photography was opened and most of his loyal customers from that chain store followed him in his new endeavor and are still his clients today.

Kurt continues to learn new photographic techniques and keeps up with the current trends in photography by attending photographic classes, seminars and training schools studying under master photographers like Scott Dupras and Rod Brown. He likes to keep things fresh for his customers. He is constantly updating his studio sets and props and loves to find new places to go to for his on-location photography shoots. In 2009, Kurt launched his Kurt's Kustom Keepsakes green screen photo booth which has quickly become the "must have" addition to any party or gathering.
© KURT NIELSEN PHOTOGRAPHY
Powered by ZENFOLIO User Agreement
Cancel
Continue